You are here: Home1 / Franz Limmer

Franz Limmer was born in Vienna in 1808 where he studied among other subjects the cello and the clarinet. His teacher for harmony, composition and orchestration was the highly esteemed Ignaz Ritter von Seyfried. Already at the age of seventeen he composed a Mass in D major which was premiered in Vienna.
In 1834 the director of the German theatre in Timisoara offered Limmer a position as conductor. Limmer accepted and Timisoara became his second home. In 1835 he was appointed choirmaster of the local cathedral and for this church he wrote his best-known work: the Offertorium in A (Justus ut palma florebit). 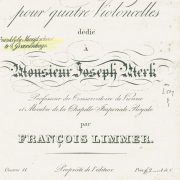