August Eberhard Müller was born in Germany in 1767. He was not only composer but also pianist, organist, conductor and flautist. After music lessons by his father he began to study law in 1786 in Göttingen. There he attracted attention as a flautist in informal concerts. He then made concert tours and worked in a few cities like Magdeburg, Berlin and Leipzig where in 1794 he joined the Gewandhaus orchestra as first flautist. In 1800 he became assistant at the Thomaskirche and in 1804 he himself became Kantor there. In 1810 he went to Weimar to become musical director of the court orchestra and opera. He had an excelent ear and tried to raise the standard of the performances.
The starting poit of his compositions was Mozart. He did much to spread the works of Mozart and Haydn: he performed their works and he prepaired piano arrangements for Breitkopf & Härtel. Beethoven wrote to that publisher that he held Müller in high esteem as an artist.
He published a Klavier- und Fortepiano-Schule in 1804 which was a revised and much enlarged sixth edition of Löhlein’s Clavierschule. Carl Czerny would revise this Schule as late as 1825. 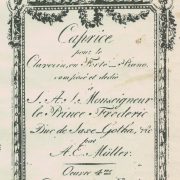 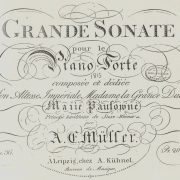